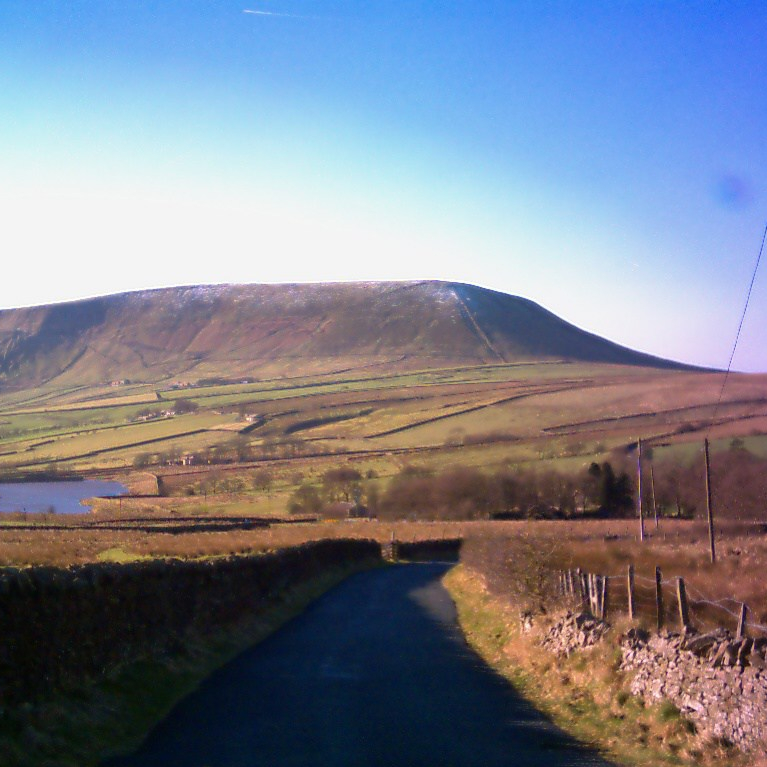 Fresh air and green space are precious commodities at present.  Our Radicals researchers want to honour the pioneers who gave working class people a chance of sharing those bounties.  Walking guide author and Pendle Radicals volunteer Nick Burton writes about T A Leonard and the collective joys of rambling and singing.

I get all my pleasure the hard moorland way,

I may be a wage slave on Monday,

But I am a free man on Sunday.

These words are the familiar chorus from Ewan McColl’s celebrated hiking song, The Manchester Rambler. It was a song written soon after and inspired by the Kinder Trespass of 1932 which has become synonymous with rambling. But what ramblers’ songs came before it? After all, rambling and singing were popular with the working classes of the industrial north in the 19th century and the two free communal pursuits went together so naturally. The story of our own Pendle Radical, Thomas Arthur Leonard, provides an interesting insight into how rambling and singing became dovetailed in perfect harmony.

T.A. Leonard (1864-1948) was a London born Congregational Minister who accepted the post as pastor at the Dockray Square Congregational Church in 1890. This church stood on the current Colne Library site and Leonard and his family took up lodgings in Keighley Road. Leonard himself described Colne as a, ‘bleak upland township’ but it was here that he quickly put into practice his own philosophy of holiday-making: cheap, educational holidays in the countryside for the working class, a departure from the typical boozy and frivolous Wakes Week holidays most mill workers spent in crowded seaside resorts.

Like many other non-conformist churches, the activities at Dockray Square church were organised through a social guild. The guild organised pastimes to improve the lives of their church members with educational evening classes, musical recitals, choir singing and, of course, a rambling club set up by T.A. Leonard himself. The rambling club enjoyed the local delights and fresh air of the Pennines and Ribblesdale until in June 1891, T.A. Leonard organised the first club holiday to Ambleside.

Leonard took a group of 32 Colne mill workers to stay at Smallwood House in Ambleside – this is still a guest house today. The cost of the holiday was 21 shillings including the rail fare. Days were spent on rigorous fell walks. Evenings were spent in communal fellowship with scientific lectures. The singing of songs was an integral part of both the walks in the day and the social gatherings in the evening.

The author Douglas George Hope, in his book Thomas Arthur Leonard and the Co-operative Holidays Association, reveals that ‘a simple broadsheet’ of songs had been used in Leonard’s early walking holidays from Colne. We know that Auld Lang Syne was one of the songs included as Hope notes that this was traditionally sung at the social evening on the last day of Leonard’s holidays. After Leonard’s formation of the Co-operative Holidays Association (CHA) in 1893, Hope also notes that by 1897 the ‘simple broadsheet’ with popular hymns like Jerusalem had expanded into a CHA booklet of 38 songs – made up of ‘hymns and traditional songs such as John Peel and Strawberry Fair’.

Leonard’s successful Colne experiment led to him forming the national organisation of the CHA with affordable and educational walking holidays for both men and women. The earliest accommodation centres were in locations such as Ambleside, Keswick, Edinburgh, Barmouth, Whitby, Buxton and Conwy. It is interesting to note that another of our Pendle Radicals, Selina Cooper, the suffragist campaigner from Barnoldswick, helped run a CHA centre in Keld with her husband for a year.

The immediate success of CHA holidays is also reflected in the need for a bigger songbook. As Hope notes, the booklet of 38 songs produced in 1897 was replaced only a year later by a song book of 60 songs. This was known as Songs of Faith, Nature and Comradeship and was expanded in the early years of the 1900’s to include French and German songs as the CHA began to offer affordable international walking holidays in Europe in the years leading up to the First World War. The song book included La Marseillaise, Der Gute Kamerad (The Good Comrade) and the carol O Tannenbaum. Holidaying in France or Germany, the importance of these songs in cementing international friendships should not be underestimated.

T.A. Leonard with his pioneering spirit never rested upon his laurels. He parted company from the CHA in 1913 to form the Holiday Fellowship (HF). He felt the CHA was becoming rather middle class and conservative in its outlook and the HF was intended to return to that original philosophy of providing cheap, simple holidays for the working class. Yet he made sure he took his songbook with him and both the CHA and the HF used the Songs of Faith, Nature and Comradeship, the communal singing being as much a part of HF holidays as they were at CHA holiday centres. In 1922 the HF produced its own songbook, Songs by The Way which by 1929 had morphed into the booklet known as Songs of Faith, Nature and Fellowship. The HF singalongs cut out the traditional hymns and concentrated more on rousing folk songs. I am sure the likes of Ilkley Moor Baht ‘at was in there somewhere.

Leonard’s songbook, which had started as a simple broadsheet in Colne, lasted into the post-war days of the CHA and HF. Inevitably, the social and cultural changes in British holiday-making in the 1960’s led to the demise of communal singing both on walks and at the holiday centres. Increasingly, people used the CHA and HF centres to do their own individual thing, even go to the local pub in the evening (which would have been frowned upon by Leonard) or watch TV in the lounge. The CHA and HF had to survive in a world that had more choice for holidaymakers and they adapted by offering specialist activity and themed holidays.

Perhaps as a tribute to the Congregational minister who helped improve the lives of many East Lancashire mill workers, we can celebrate by singing his songs once again. The revival of interest in local choirs around Pendle Hill reflects the importance of singing – and rambling – as a free communal activity that is good for social interaction and, ultimately, for mental well being. We need to grasp the Songs of Faith, Nature and Fellowship and walk across the hill again in communal song. It will be a fitting tribute to the work of Thomas Arthur Leonard, the undoubted father of the British open-air movement which began in the shadow of Pendle Hill.

As the popular 1950’s rambling song, The Happy Wanderer, goes:

I love to go a-wandering

Along the mountain track

And as I go, I love to sing

My knapsack on my back

Nick will be back leading a series of Bowland history walks in autumn 2020.  Read more on his own website.  With other Radicals volunteers, he is also working on themed walks for the Pendle Radicals programme, including a Two Toms walk linking Leonard with Tom Criddle Stephenson.  Watch out for details!

One thought on “We’re Going To Need A Bigger Songbook”